On June 18th in Sofia's Czech Center me and Martin Lukanov will perform our piano-based, neo-classical album 'Two' alongside 'Between' and other (unreleased) pieces in the very same vein. We have performed this only once before, as the opening live of the 7th Alarma Punk Jazz Festival, back in 2012 or something. Now that Martin is back from Thailand for a few months we were invited to do it for a second time (after an unsucessful attempt to play the music with a guest pianist in 2013).

Our special guest will be Simeon Dotkov and his newest brainchild BHE (Binaural Headset Experiment). This will be his first gig with this alias and he'll present material from his third album 'Remember', released by Mahorka on May 18th. Besides neatly composed and produced, his music is a very interesting experiment with binaural beats and isochronic tones. I recently invited him to speak about his approach in front of my Sound Art students and he did manage to really grab their attention so yeah, really looking forward to hearing BHE on a large sound. 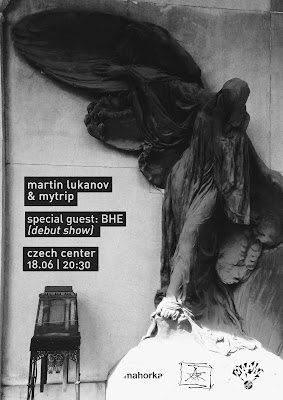