... just a bunch of people going the same way. 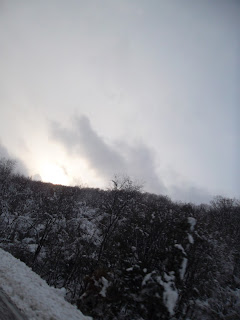 Actually less than a month passed since we presented the debut Expectations album. I already told you its/our story here so I'll be short. After four super nice promo shows in Sofia, Belgrade, Varna and Plovdiv we decided to let everyone get our album for whatever price they want. Yes this means you can get it for FREE from Bandcamp (player embedded below) or from Mediafire. If you feel like supporting us download it for few bucks or buy a physical copy or merch (to be updated soon) from our Bigcartel page. All help will be appreciated, all feedback too.

But what's more important today we present our first official video for the song 'Goodbye Today'. It was directed by Boris Nikolov 'Brodnik' (MELEKH) and was shot in Prague, Czech Republic. Enjoy!

I've been playing dark ambient music live since the end of 2007 when I finally moved to Sofia. Before I moved there was so much going on and in my dreams I could see a strong (post) industrial scene waiting to be developed. I remember reading about a lot of DJ parties and lots of shows (incl. dark ambient ones). And the moment Sofia became my home all of this disappeared. The remains are now few Halloween parties and once or twice an year a huge foreign band playing in front of 300 people. I'm not so sure if people even bye cool goth clothes anymore.
However we started playing live, and we started playing live a lot. I'm describing the industrial scene because somehow dark ambient / drone / noise have to be related to it being incarnations of the post-industrial. When you inhabit a scene or are involved in a subculture formed by no more than 10 other people your development is seriously challenged because of the lack of 'competition' (used here in a really, really figurative way). And as you may have noticed if you spent some time reading my short stories here I try to heal this lack by getting involved in as many musical endeavors as possible.

I remember a show we made for a bus full of Hungarian dudes playing experimental music. It was in February 2009 and there were over 4 projects so we barely had time to play and me and Martin decided to collaborate and mix my dark ambient with his analogue noise manipulations. This was the first time I felt nervous before playing a show. This sudden collaboration opened another way to heal the lack of ideas and competition in a small scene by challenging yourself through uniting people and their unique ideas about music plus doing it totally free of discussions and common preparations as I explained in my previous blog entry. That show pretty much gave birth to mother spit, a really minimalistic drone ambient / noise project which almost like zev died orchestra exists only to create free music with its sole concept being total and free improvisation. 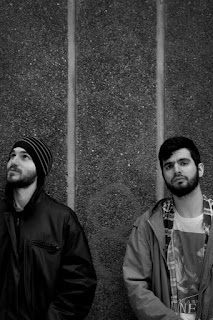 Last year we decided to collaborate again but in a different way. After an afternoon spent on combining already recorded ideas with music created in the spur of the moment we were able to record something totally different from what we have done so far. An album, long exactly 22:22 minutes with its whole concept gravitating around the idea of duality both regarding its sound, our positioning in the songs, the track lengths and their structure. It was fun to come up with something like that so fast. We spread it for free and considering the statistics a lot of people heard it. Not so many talked about it but that's okay. We don't talk that much too. If you have missed it hear it now while you are still reading this.

This year we wanted to continue what we started but it seems our music has changed and we couldn't do what we did in just a day in 2011. Actually it took us two or three days to finish just a single song. But we played live and it was really, really different from all shows I've made so far. It was neither bad nor as perfect as we wanted it to be. It made us realize our music is put somewhere between, between genre restrictions, between aesthetic expectations, between perfection and primal ideas. And we decided to publish what we created despite it wasn't all we wanted to create. Maybe it was what we could create in the specific moment.

Between is placed somewhere in the middle.It's either near an end or close to a new beginning.Between may have no direction but holds a particular meaning.It's not developing but is in process and it might be a sign of existence.Between we find it easier to create.We trust complete darkness. We formed zev died orchestra somewhere around 2009. It is me plus Martin Lukanov (gokkun) and Nikola Marinov (kanalen pluh, wayab) Since then we have had maybe three shows in our full line up and two or so where we were 2/3 of the project (one of which was transformed into mother spit by me and Martin Lukanov). This project has existed only live (despite we had the idea to record a studio album) and if it is to be described shortly that would be total freedom. So if you want to see probably the only live we'll do as zev died orchestra this year check this show out. It is a surprise show both for you and for us. It's gonna be fun. Plus it's been ages since we booked a show as amek. 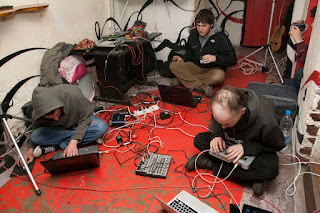 zev died orchestra // 2011
A quite essential thing for you to do, even if you skip the gig, is to check the author of the photography I used for the poster. Her works are great and her flickr profile is waiting for you HERE.
Публикувано от angel s. в 16:53 ч. Няма коментари: