A sudden collaboration after a quick acquaintance resulted in this. It was performed on May 19, 2012 during the first 'In Dark' festival in Shambala Bar, Sofia. I've been talking about this a lot the last week but it was a really mesmerizing experience for me and I can't help hoping I will play with Lebdi again really, really soon. Don't judge us too hard on the sound, it was recorded acoustically and almost no treatments were made as there was no point actually. The video shows only half of the set, you can download the full recording from bandcamp for free donation.

After four days, almost 24 hours of which spent in five trains, a bus and a bunch of cabs our/my small initiative Trainbient came to an end. And I am pretty certain it couldn't have gone better. I am also pretty certain of few more things. There are a lot of people who would appreciate experimental electronic music and ambient and it is really, really worth the effort to get your ass in the train and come to their city to share it with them. There are a lot of awesome people in each town we visited and there's a lot of sense in the idea of playing everywhere in Bulgaria. In this sense I really hope we'll do this again and we'll reach even more places. So here's in short what happened.

To get to Shoumen via a train is a pain in the ass but this applies to each place in Bulgaria. However it's cheap so I'm pretty okay with it. Found a mate, spend an hour talking to him, then fell asleep, did some reading and slept again and the Shoumen station appeared. An hour later we were at the place. It is a decent coffee shop we've already played in March so we knew what to expect. Less people showed up this time but there were new faces. The general atmosphere was really intimate and cool. I think the poets (Antonii and Ralica) who opened the event have gathered their most depressive and anti-god works which was awesome as the venue being ran by a sect or something like that. The staff was pretty much clicking with their tongues but we got an invitation to play there again so I guess they are from the tolerant zealots lol. After the show we had awesome veggie meal by our host Nick from |H|14| and I personally turned my back to the rest of the guys and this was the first and the last time I slept in a bed those few days.

When I woke up the next morning it was raining cats and dogs in Shoumen and we felt really sorry we hadn't chosen 'Rainbient' for this bunch of shows. After cookies and banana tea for breakfast a cab takes us to the station and there's exactly one coffee time until we jump in the next train. Pretty much no talking in this one, short sleep for everybody, then we left that train to switch it with another. Fed a really sweet crippled dog while waiting at the station, Nick almost beat a bum arguing with us for feeding our dog friend then a skinhead cunt with the coolest ringtone in the world and we're in the train again. In Rousse the weather seems super nice, we head directly to the venue, set up things and I play the coolest warming up set with some weird ass music. We play, people dig Teeth of Divine a lot because he's a cool dude using real instruments unlike my lazy computer based ambient shit. However it seems there are people at the venue who want to hear exactly ambient drone stuff which is cool. Äfter |H|14| played a better set than the one from last night we make a tripple collab which was fun and people also dug it the most.
After the show I started dj-ing the coolest post-punk and pre-industrial tunes. That lasted less than an hour when a bartender came asking if they can now play 'their' music and my set was cut so they can play ska. No cool sexy music means abandoning ship. We packed our gear and went to a show of a noisecore/grindcore band called Sauerkraut which is pretty much a local legend. It was the weirdest gig in my entire life. When it was over we roamed around Rousse a bit then we went to the station when I spent the next six hours sleeping on a bench like a true bum. Around 6 o'clock I hit the train with few cool people I knew and met by accident as they were also playing a show in Varna later the same day.

We were about half an hour from Varna when our train suddenly stopped. Few minutes later we were told the train killed a person. This is like the third time such stuff happens to me but I guess this is the price people pay for travelling with Satan. So we take a bus to Varna. The next few hours are a bit blurry for me as I spent probably 3 hours just hanging on the beach, reading a book. When I was leaving it I saw a seagull standing almost in the water holding something weird. I was about to take a photo of it when I saw actually that was its own wing. The bone was broken badly and it was just hanging there. It was the most annoying thing I've seen for a long time. I browsed the Internet but I couldn't find a phone of a public vet service which I can call. I talked to few girls who were standing close to the bird and they told me they already called the emergency number but probably no one will come and take care for a dying seagull as they are already too many. I left the beach pretty messed up I still can't take that image of the bird out of my head. It spend her whole tiny life in the sky and as an attempt to kill itself she tried to drown itself in the sea and the girls told me she tried really bad to remove its own wing. And all we give a fuck about is money, pretty pathetic ha. I didn't have the guts to return or wait to see what happened.
When I finally left the beach, I met my mates from Rousse once again, then met my sweet red-haired Varna guide and we went to the gallery where I was about to finish the tour alone. A really cool dude had already brought a sound system so we connected the stuff and I spent the next few hours playing an insane mix of weird music by mostly female artists which I was ruining with mostly rhythmic improvisations which I rarely do. It was quite a fun. The event itself was an exhibition of diploma works by students from an art school and the girls I knew had the coolest stuff I guess. There were actually many awesome works but there were a lot of crappy ones also. I think this applies to all art events so nothing new. What amazed me more was that there were actually people who had come to see a concert of our bands and were a bit disappointed Teeth of Divine and |H|14| couldn't make it. But this is just one more reason to come back to Varna asap.
Anyway, it was a quick and early show and we had a plenty of time to spend afterwards. So me and xArielx went to the see the sea again. An hour before my train we went to the show the Rousse guys were playing and half an hour later I had to leave. Nine hours later I was in Sofia, (almost) in my bed.
Публикувано от angel s. в 12:11 ч. 1 коментар:

As I already explained here few months ago, my music found a cool new place to exist. This happened in Shoumen, Bulgaria - a city that has never before had anything to do with experimental sound. However I never told how the shows went so I can pretty much summarize that by a single word - superb. So it's not a surprise I/we are coming back and this time we're going even further to Rousse - another city for which I totally have no expectations or idea how would embrace the idea of listening to stuff that most people accept as background noise to horror movies let's say. Still I don't care. There's a third show, which was a hell to book and that I will most likely play alone but still I don't give a damn. So if you are around, come to see us/me at the Trainbient mini tour. I guess we'll be playing only free shows so buy a cd, tape or just look involved. We'll appreciate that. As to Varna, I don't give a damn as long as I can hang out on the beach for like eternity. 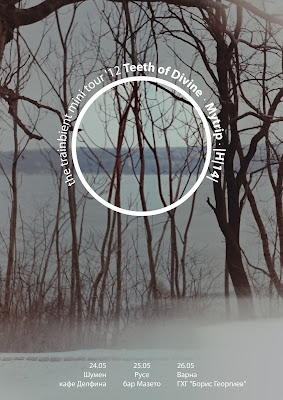