Pretty soon after I collaborated with Iskra Ivanova on her video art piece 'Corpus', already presented in detail here, we are again knee deep in a new common project, this time with the visual artist Neno Belchev aboard. This brand new collaboration, named '[UN]Limited Edition', will bring me for a first time in the field of contemporary dance. In 2012 I took part as a part of a live sound session for a performance of a similar type called "Хлябът на живота". However, back then me, |14| and Teeth of Divine basically played live ambient/drone/noise improvisation set during the performance, which we hadn't seen beforehand.

This time the process is far more organized as this project is actually Iskra's first artist residency at the awesome Derida Dance Center in Sofia. So far I can't really disclose any details about the music, but I'll surely post some snippets as soon as I structure all that's in my head. 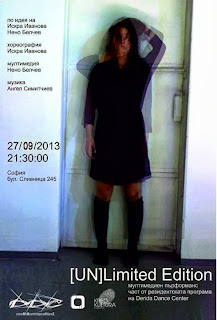 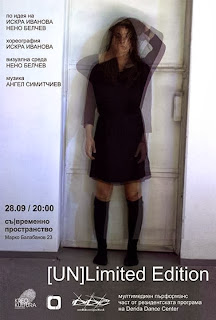 More info (in Bulgarian) about all of us, and the project can be found here. Here's an excerpt of the sound ambience I've created for the piece.

As I explained few posts ago, my freshly abandoned music activities in the hardcore/punk/metal scene will be replaced by sticking more to electro-acoustic and media music. Not only because this is the field I want to grow in, but it's also the place where I can independently develop my music without other (master) minds interfering in my aesthetic choices. One of the latest results of this is called "CORPUS", it's short film, somewhere between video art and visual music. It was initiated and created by the Bulgarian contemporary dancer and performance artist Iskra Ivanova and it's featuring a piece I exclusively created and recorded.The good news is that collab won't be our last, so keep an eye for updates are coming soon!

"The main goal of this video is to show the body beyond cultural, anthropological, social, political and tribal beliefs."

A curious fact about the piece I created for the video is that it was solely composed on a mobile device. Then it was heavily resampled and reamped, thus retaining its original structure. The only additional element was a speech recording of Iskra explaining the concept of the project, which after my intervention became one of the leading "melodies" in the piece.