A funeral party but a birth too 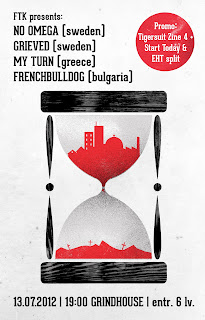 This Friday a regular show we're setting up will be turned in something way more awesome. Besides our modest crew at For The Kids Booking having the chance to bring in Sofia, Bulgaria three awesome foreign bands No Omega & Grieved (Sweden) and My Turn (Greece), we've prepared a bunch of awesome gestures and happenings aimed at showing the people who haven't got it yet that hardcore is more than music.
One of the special things I've been spending a lot of time lately is something quite symbolic. As you may have noticed one of the bands listed on the right is called Everybody Hates This. It's pretty much a defunct one however three unreleased tracks recorded in February 2010 kept me from realizing that goddamn truth. However I hate hiding music I've put a lot of effort and heart in so a decision was reached. We'll publish those tracks on a very limited DIY CDr. Cool idea indeed and the result became even cooler. Another defunct band joined with more unreleased stuff and now we have 50 copies of the 'Two Dead Bands' split between Start Today & Everybody Hates This. First 20 copies are for free for the people at the show and the rest is for 1€, so they are also pretty much a gift. And I can close that page of my life... for now.
So one band is dead but another is born kind of specially for the show. We've been discussing that for a long time and we've been looking for members for pretty much that long. We're called Frenchbulldog and we're quite pissed off. So you get the idea we want to play weird, dirty and noisy crap from hell. Only dog can judge us and pretty much in dog we trust. So if you are around Sofia, come and check our debut. We'll be fast and violent. And we already recorded a track which you can check and buy from Bandcamp. We may play again sometime in the future too. Cool ha?