04/05/16 Black Sabbatch riffs and loud PAs in Birmingham
We get to Birmingham and it's a chill ride or at least it looks like that cus I think I spent it sleeping, oh what a surprise. The venue's placed in an industrial part of an industrial city and it's pretty nice. Alicja who's running Centrala, a space for (but not limited to) Eastern European culture and arts, is already there so we're in for a quick chat. It seems she's from my favorite town in Poland, mighty kingdom of falafels - Poznan. We set up the sound in no time, we do soundcheck, Tim even records his one because it sounds pretty nice and we head for a walk. An hour and a bag of chips later we're back. It doesn't look as if it'll be a pretty busy night so we wait for bunch of people to gather and we start. Tim's doing Ræppen tonight and it sounds massive through the PA, I still think his favorite set for the tour. We go shortly after him and we surely do play our best live so far. I guess the Centrala ambience does the job cus everything sounds and feels nice. After the show Richard, who's the other person running Centrala takes us to their place. We talk for few hours, eat great pizza and a traditional Polish meal, which Alicja has prepared for us and it's awesome. It's sleeping times, and that's the best. Tomorrow we're leaving the house at 9 which is super fine cus we'll have a plenty of time to explore Brighton. In the morning we're meeting their kid Iwo and his fluffy dachshund, with a complex name I can't seem to remember. He's a cute dude with an attitude, just like his parents.

05/05/16 NEVER LEAVING BRIGHTON
It's around noon and we're already in Brighton. I've been waiting for this moment for two years, because that place is magic. This time however, we catch all the tourist experience since last time we arrived pretty late and the whole city was already asleep. Now it's pretty full, stores are open, people are everywhere and after we stop the car at The Green Door Store and Tim and Daniel grab a quick bite we head to the beach where we spend the next two hours. Hanging out at the sea is the best, we do something between napping, chilling, nothing, whatever and we're back to the venue for soundcheck. The Green Door Store sounds amazing as usual and it doesn't take us long to do our stuff. Still plenty of time before the show starts so we fool around, drink Dr. Peppers, eat some more chips (some of us go for cheese & chips, not mentioning names) and it's show time.

Broken Star play some oldschool electronics with mostly ebowed and heavily effected guitar, they sound pretty good, and surely have good moments. After then we're on for a blended set because our friend Geoff, who's in charge of the Spirit of Gravity event series thought we're playing a collab set, however we cut our set a bit shorter to leave Tim summon the Sami spirits once again and it works pretty good as the sound is massive and let the music feel as it's supposed to feel. I might have get off the stage to scream among the audience, who knows. Tim does few very interesting passages during his set playing with stones he picked at the beach which gives a very nice touch and sense to the whole set. After us are SQ feat KET from Sweden. They have a very interesting sound, with modulated vocal samples and minimalist soundscapes, over which are placed glitched and loud sounds triggered via Wii controllers. A pretty interesting set up overall, would have enjoyed it if it had more extreme peaks but still felt nice. Shortly after the gig we're already packed and head to my friend Matthew's house where we're spending the night. It's a crazy student house, with 7 artist dudes living there so you can imagine it's a pretty special place hahah. Shutting down times. Tomorrow is a short drive, which means more time to explore lovely Brighton.

06/06/16 Weird times in Chatham
So we're not leaving Brighton before 2 pm today and me and Daniel head to a three hour walk in Brighton. More Dr. Peppers and hanging out at the beach before we head to Chatham. It's a short drive nonetheless. 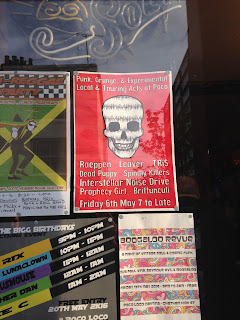 Around 7 pm we get to the place, finding a parking spot is a bitch, but we manage to score something not too far from the venue, which tonight is a bar that is already pretty crammed. Not sure how bar people will enjoy the strange Ræppen & Leaver agenda, I guess not too well haha. It's a huge bill tonight. With people playing stuff from guitar ambient, experimental folk to grunge and whatnot. We're not on until 11 pm so it'll be a long night. We grab some hardcore fried stuff, but can't seem to find coffee anywhere, so things are getting harder haha. Anyhow, the show starts and I can't really seem to take track of what's happening. For sure I dig Interstellar Noise Drive who does some really nice minimal guitar ambient over nice morphing ambiances coming from a computer. Later I find out that the backing track was actually written by Matt, who's promoter Abi's boyfriend and also our host. Then there are the Dead Puppy guys, which have some good guitar work in their music, but the pedophile references of their closing song I don't really dig. Old people singing about 17 y.o. chicks wanting them ain't really my cup of joe. Then Tim plays Ræppen and bar people come shouting, dancing strange dances, asking for the sound level to be decreased. Tim's answer is to get even louder, but I guess that's how you treat drunk morons. Next is us and I seem to have lost a cable and can't really do half of the stuff I play live, so I'm just fucking around with textures, while Daniel handles most of the music. Drunk people are still disrespectful and I end up storming and shouting across the whole bar during our last track. Sadly nobody drops their drinks.

Anyhow, for such a problematic evening we manage to pull this one off... somehow. After us is The Reactor Core is Splendid, a project we've been hearing a lot of stories from Tim and he does live up to our expectations. Broken, outsider music, total deconstruction of guitar playing and structure and everything, with strange lyrics and flat, senseless singing (in the coolest way you can imagine). This guy is the best thing I've seen on the tour for sure. He has something really special and surely can piss people off. Gotta love it. Proof's below! Should have bought CDs.

The night is over we head to Abi's place which is just above the bar, where we meet their three cats, which are awesome. Black lady Knicks is slightly being friendly, the ginger Little Dude keeps his distance and Squish actually comes over and establishes contact. ZZzzzzzz times now. The morning feels good, Tim's having some issues with his body because of too much fried food he says, so no more fry ups the next few days. We get some nice coffee, take a shower, have some toasts and we chat with Abi and Matt, who are the nicest people ever and have an awesome collection of Clive Barker books and whatnot. Abi's art is all over the walls of their house and it's a shame I didn't take some sneaky footage. I love the three cats are present in most of her paintings. That's how you love your cats!

It's 12 already and our parking ticket is about to expire, which means time to hit the road to Cambridge for our penultimate show of the tour. Sad times.